Padel was first played in Acapulco / Mexico in 1965 when the multi-millionaire Don Enrique Corcuera wanted to build a tennis court behind his house, but didn't have enough space. This is how the shape of the padel court came about. The first court in Europe was built in 1968 in Marbella Spain, from there the padel sport first found its way to Argentina, where the first courts were built in the famous "Ocean Club" in Mar del Plata in 1970. Today an estimated 6 million players play in Argentina on over 40,000 courts.

Spain and Argentina are the leading nations in padel today, but the padel boom has now spread to many other countries, such as Portugal, France, Sweden, England and Italy. Courtwall ™ built the first padel court from its own production in 2002 in Halberstadt / Germany, when the sport was still completely unknown there. Courtwall ™’s 35 years of experience in building high quality squash courts is now being continued in the construction of padel courts. 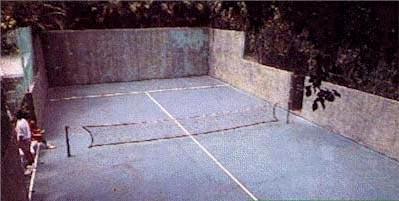 Courtwall®, headquartered in Vienna, Austria, has built over 1200 squash courts worldwide since 1984. Courtwall® squash courts have always stood for the highest quality, functionality and the best price-performance ratio on the market. European engineering and the manufacture of all components in European ISO certified factories meet the highest requirements of the most demanding customers. Courtwall has also been producing PADEL Courts since 2007. The Courtwall® group of companies has been running its own squash and racket club facilities in Europe for decades, including one of the pioneering padel facilities in Graz / Austria. We know exactly what our customers expect from squash and padel courts - and we build courts "Made for Winners!"

Courtwall GmbH
Heiligenstädter Straße 86, A-1190 Vienna, Austria
info@courtwall.com
Please contact us with your project by email.